Memorial Day: Remembering ALL Soldiers who have lost their lives!

Posted on May 25, 2020 by Michelle Clark Bipolar Bandit 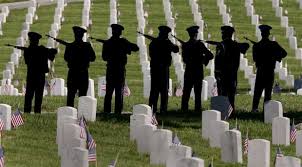 Today is not just a day to celebrate the first day of summer with our friends and family.

It is a day to remember the men and women who have lost their lives fighting for our freedom.

Many often think that in order to be one who is remembered today that you must have fallen in battle fighting in a physical war.  However, there is a different wars that some soldiers face and that is one that is invisible.  They are called mental illnesses like Post Traumatic Stress Disorder(PTSD), depression, anxiety, etc.

Many of these soldiers struggle with a battle that leads them to suicide. We must remember those fallen soldiers as well.  A single number has shaped the way that Americans think about young military veterans. It’s the number 22, as in, 22 vets take their lives each day. The number has become a rallying cry for advocates trying to call attention to suicide among vets, especially those who served in Iraq and Afghanistan. (Oct 1, 2015:Google)

If you know someone who is struggling with a mental illness related to serving in our military, now is the time to check on them.  There are many organizations set up to help them including Wounded Warriors.

If you someone who you are concerned that they are thinking about taking their own lives, act NOW.  Please call or have them call the Suicide Prevention Hotline at 1-800-273-8255.

I am a strong advocate for the mentally ill and have been since I was first approached by a lawyer in a psychiatric facility as a teenager. He wanted me to help him fight how the mentally ill are mistreated. I was diagnosed with bipolar disorder at the age of 17 after a full blown manic episode. Before that, I suffered from debilitating depression for 4 years. My goals are to help others by sharing my story and providing tips to deal with mania and depression. I often write blogs related to advocating for people like myself. I want to encourage, inspire, and educate those with #bipolar disorder and other mental illnesses and also include inspirational #quotes. I founded the group Advocates for People with Mental Illnesses and the page Mental Health Advocates United and have several social media sites that are related to bipolar disorder and/or advocacy. If you are an advocate or would like to be, I hope you join our FB group: Advocates for People with Mental Illnesses
View all posts by Michelle Clark Bipolar Bandit →
This entry was posted in depression, media, Memorial Day, mental health awareness, Uncategorized and tagged anxiety, depression, Memorial Day, memorialday2020, mental illness, Mentalhealthawareness, PTSD, solidiers, suicide, suicidehotline, veterans. Bookmark the permalink.