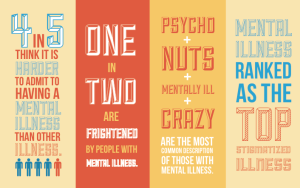 Every time there is a mass shooting, I just wait for the media to tell us that the person was mentally ill and that is why they did it.  It saddens me that the media oftentimes does not mention that less than 1% of people with mental illness are violent.

They also don’t use the opportunity to educate the public about mental illness, let them know what signs to look for, assure them it is okay to get help and where to get it.  Instead the media would rather just let the public think that all people with mental illness are violent.

After this horrible tragedy, some  politicians have tried  to use the opportunity to further their stance on either gun control or to express concern about  how the nation needs a better mental health system. However, I was encouraged to see that most of them didn’t. Some of their responses

This time is different!  I have heard the people in the media blame this on Vester Flanagan’s, (Bryce’s) mental health and others make it clear that gun control would have prevented it.  These people in the media came to the conclusion that the shooter was crazy and had a mental illness within hours of the incident.  It is now two days later and no one has mentioned what mental illness they have.  For some examples, watch Fox News, specifically The Five the day of the shooting and the day afterwards.

He went on to say, “Everybody sees the signals … they see people and they think they’re disturbed” I don’t think people know what to look for.  This could be helped by the media letting the public know like previously stated.

The way the media and politicians treat these crimes in regards to mental illness matters. “It exacerbates negative attitudes towards people with mental illnesses” according to a study done in 2013.  Source

The quotes below and other information about mental illness and violence and the connection can be found  here.

“Although studies suggest a link between mental illnesses and violence, the contribution of people with mental illnesses to overall rates of violence is small, and further, the magnitude of the relationship is greatly exaggerated in the minds of the general population”

“The absolute risk of violence among the mentally ill as a group is very small. . . only a small proportion of the violence in our society can be attributed to persons who are mentally ill”

Note: My heart goes out to those affected by this horrible tragedy.  My thoughts and prayers are with their families and co-workers.

I am a strong advocate for the mentally ill and have been since I was first approached by a lawyer in a psychiatric facility as a teenager. He wanted me to help him fight how the mentally ill are mistreated. I was diagnosed with bipolar disorder at the age of 17 after a full blown manic episode. Before that, I suffered from debilitating depression for 4 years. My goals are to help others by sharing my story and providing tips to deal with mania and depression. I often write blogs related to advocating for people like myself. I want to encourage, inspire, and educate those with #bipolar disorder and other mental illnesses and also include inspirational #quotes. I founded the group Advocates for People with Mental Illnesses and the page Mental Health Advocates United and have several social media sites that are related to bipolar disorder and/or advocacy. If you are an advocate or would like to be, I hope you join our FB group: Advocates for People with Mental Illnesses
View all posts by Michelle Clark Bipolar Bandit →
This entry was posted in Uncategorized and tagged bryce williams, clinton, donald trump, donald trump and mental illness, gun control, mental health, mental illness, reporter shot on live television, vester flanagan, violence and mental illness, virginia shooting. Bookmark the permalink.