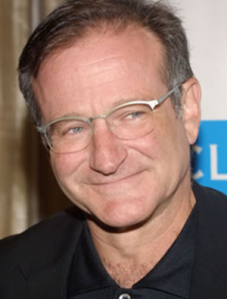 Robin Williams, a wonderful actor, had bipolar disorder. This mental illness does not discriminate.  I, a long with many, are saddened by his death.  I feel for his family and the many people who loved this outstanding man.

Bipolar disorder is a horrible disease that is often not discussed due to the stigma attached to mental illness. It needs to be talked about and hopefully over the next few weeks, people will learn more about this illness.

Many talented people over time have been diagnosed with bipolar disorder. Please see my  Pinterest site for 250 of them or see Famous People with Bipolar Disorder.

Mania is defined by Merriam-Webster as excitement manifested by mental and physical hyperactivity, disorganization of behavior, and elevation of mood. 2  However, if you have bipolar disorder or know someone who does, you know that this does not begin to explain mania.

While manic, these are some of the qualities a person displays:

Depression is defined by Merriam-Webster as a serious medical condition in which a person feels very sad, hopeless, and unimportant and often is unable to live in a normal way. 3

Having bipolar disorder increases suicide risk by 15X more than that of the general  population. 1

Some facts on Suicide:

Although Robin Williams’s death is a tragedy, I hope something good can come from it. I hope more people learn about bipolar disorder and depression and mental illness is less stigmatized so that the rate of suicide goes down because people seek help.

If you or someone you know is thinking about suicide, please get help.

I am a strong advocate for the mentally ill and have been since I was first approached by a lawyer in a psychiatric facility as a teenager. He wanted me to help him fight how the mentally ill are mistreated. I was diagnosed with bipolar disorder at the age of 17 after a full blown manic episode. Before that, I suffered from debilitating depression for 4 years. My goals are to help others by sharing my story and providing tips to deal with mania and depression. I often write blogs related to advocating for people like myself. I want to encourage, inspire, and educate those with #bipolar disorder and other mental illnesses and also include inspirational #quotes. I founded the group Advocates for People with Mental Illnesses and the page Mental Health Advocates United and have several social media sites that are related to bipolar disorder and/or advocacy. If you are an advocate or would like to be, I hope you join our FB group: Advocates for People with Mental Illnesses
View all posts by Michelle Clark Bipolar Bandit →
This entry was posted in Uncategorized and tagged bipolar disorder, depression, mania, robin williams, robin williams's suicide, suicide, suicide hotline. Bookmark the permalink.