Posted on May 24, 2013 by Michelle Clark Bipolar Bandit 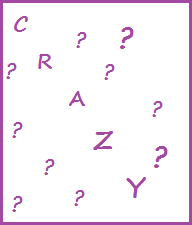 The first known use of the word “crazy” was in 1566.  Two antonyms of the word crazy are realistic and reasonable.

I think I would much rather someone say that I have a mental illness than to say I am crazy. However, at the same time, since the stigma for mental illnesses still runs rampant, maybe I should settle for the word crazy.

I recently had a conversation with someone who has a mentally ill relative and she had told had told her kids not to use the word the word crazy because it wasn’t nice. Is the word not nice?

So, today, I decided to look the word up that is used so often to describe so many things. I wanted to know if using the word crazy to describe someone with a mental illness is accurate.

Well, they are! I could still argue that it is not a “nice word”. However, I guess I can’t blame people for using the word correctly.

Merriam-Webster defines “crazy” (pertaining to how it is being used in this blog) as:

Examples given of how to use the word are:

I decided a long time ago that I was not going to let it bother me when someone called me crazy, especially when they didn’t know I have a mental illness. However, it still does upset me sometimes when people use the word loosely and in a way to define someone. I guess I shouldn’t as I have already stated we are all a little crazy.

I am a strong advocate for the mentally ill and have been since I was first approached by a lawyer in a psychiatric facility as a teenager. He wanted me to help him fight how the mentally ill are mistreated. I was diagnosed with bipolar disorder at the age of 17 after a full blown manic episode. Before that, I suffered from debilitating depression for 4 years. My goals are to help others by sharing my story and providing tips to deal with mania and depression. I often write blogs related to advocating for people like myself. I want to encourage, inspire, and educate those with #bipolar disorder and other mental illnesses and also include inspirational #quotes. I founded the group Advocates for People with Mental Illnesses and the page Mental Health Advocates United and have several social media sites that are related to bipolar disorder and/or advocacy. If you are an advocate or would like to be, I hope you join our FB group: Advocates for People with Mental Illnesses
View all posts by Michelle Clark Bipolar Bandit →
This entry was posted in Uncategorized and tagged am i crazy, bipolar disorder, crazy, gone crazy, impractical, insane, mad, mental illness, merriam-webster, stigma, unusual. Bookmark the permalink.

10 Responses to Am I crazy?