4th Feature Story: Rita and Her Struggle with Bipolar Disorder 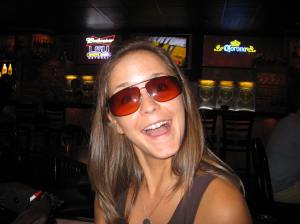 I was 19 years old when I first began to experience symptoms of bipolar.  I knew something was wrong with me at the time but didn’t want to believe it.  When I would cycle out of a hypomanic state into depression I called it the “slump”.  My hypomanic phases would last months and l absolutely loved them.  I was making all A’s in college, excelling at work and having a blast in my personal life.  Then depression would strike and my depression wasn’t like a sad depression where I cried or felt sad.  I just became very unsocial, my grades would suffer and work became extremely difficult.  It was more of a cognitive thing like memorization, understanding and processing information suddenly became a challenge.  I saw a few doctors and they all said the same thing- sounds like you might have bipolar.  I was definitely not prepared to accept that as an answer to my “slump” so I continued living in hypomania and depression for 7 years until I had my first psychotic break.

I only remember bits and pieces from my first full blown manic episode.  I thought the radio was personally talking to me.  I had extreme religious delusions.  I thought all my friends and even people on TV were my brothers and sisters and my Dad had fathered all these illegitimate children.  I thought my cell phone was tapped.  I thought I was being stalked by one of my customers at work and had called 911 several times.  911 finally sent cops out to my house and they could immediately see that I hadn’t slept in days and knew I had a chemical imbalance.  They told my Mom I could go to the hospital or jail.  Since I was super paranoid I went with option a, to the hospital I went.  From there I was transported to the first psychiatric hospital who had an open bed.  My first night at the hospital I was sedated and finally got some sleep after days of no rest.  For the third or fourth time I heard those dreadful words from the psychiatrist at the hospital, I had bipolar.  I guess this time there was no running from my diagnosis, it was time to get help.

The next year I fell into a deep depression.  I couldn’t come to terms with my diagnosis.  I didn’t want to believe I needed a pill to live for the rest of my life.  I began to see a social worker and psychiatrist on a regular basis.  Every few months my meds would change and I’d experience horrible side effects.  Nothing seemed to help.  There was no digging me out of this hole I was in.  The time when most of my friends were getting married, having kids and getting promotions- my life came to a complete stop.  I was unemployed and living back at home.

3 years and one more hospitalization later at the age of 30 I’ve finally found a combination of meds that seem to work for me.  I feel they could use a little fine-tuning, but overall I’m doing much better.  I know this is an everyday battle and one I could not fight without the support of my friends and family, especially my Mom.  I’m still a work in progress since I do not have a job and still do not socialize as much as I’d like to.  The difference now versus 3 years ago is I’m no longer embarrassed I have bipolar.  I found a NAMI support group in my area and my first meeting is next Tuesday.  I’m excited to see what that can bring to the table.  I look forward to the day where I can work again, socialize and live life more fully and am very optimistic that is in the near future.

Her story is now on NAMI.

I am a strong advocate for the mentally ill and have been since I was first approached by a lawyer in a psychiatric facility as a teenager. He wanted me to help him fight how the mentally ill are mistreated. I was diagnosed with bipolar disorder at the age of 17 after a full blown manic episode. Before that, I suffered from debilitating depression for 4 years. My goals are to help others by sharing my story and providing tips to deal with mania and depression. I often write blogs related to advocating for people like myself. I want to encourage, inspire, and educate those with #bipolar disorder and other mental illnesses and also include inspirational #quotes. I founded the group Advocates for People with Mental Illnesses and the page Mental Health Advocates United and have several social media sites that are related to bipolar disorder and/or advocacy. If you are an advocate or would like to be, I hope you join our FB group: Advocates for People with Mental Illnesses
View all posts by Michelle Clark Bipolar Bandit →
This entry was posted in Uncategorized and tagged bipolar disorder, depression, full blown manic episode, mania, manic, mental illness, nami. Bookmark the permalink.